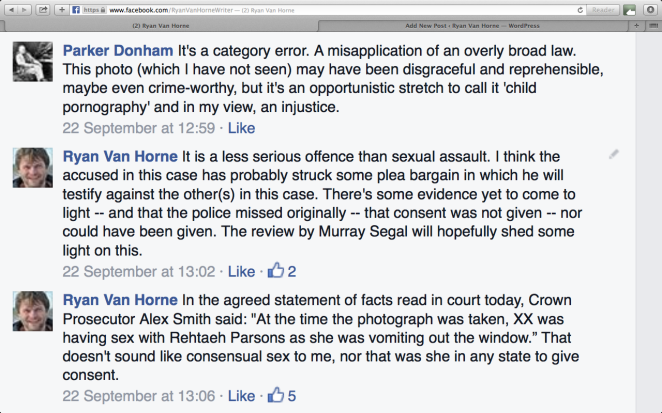 A screen capture of a comment Parker Donham made on Facebook about the child pornography charges — after the first of two guilty pleas. On Monday, a second boy pleaded guilty to distributing the photo that was used to shame and bully Rehtaeh Parsons.

Sexting advocate Parker Donham says an injustice has been committed against the two boys who pleaded guilty in the Rehtaeh Parsons case and is using the publicity around the case to champion for changes to an “overly broad law.”

Sounds ridiculous doesn’t it? No, I’m not kidding you, it’s true. I might be guilty of putting a little spin on that lede, but it’s exactly what Parker does. If anyone tells you a journalist does not put spin on their copy, don’t believe them. Parker does and he takes spin to Spinal Tap levels.

In promoting his blog on Facebook, Parker suggests that the court cases in which two boys pleaded guilty involved “a trumped up charge to appease media demands that the boys be punished.”

One might think Parker is just following the advice of the late great George Carlin to “question everything.” If you’re an adherent to that philosophy, you should also question Parker, especially because he is prone to making erroneous assumptions in addition to applying copious amounts of spin to his arguments.

Exhibit 1: He assumes there is no evidence to support sexual assault charges when the agreed statement of facts read in court suggest otherwise. He was not in court either day and seemingly is not aware of these agreed statements of fact. These facts might not convict, but there is other evidence available, and more could have been obtained by police if they simply did their job properly.

Exhibit 2: In his blog, Parker writes that child pornography law is a result of “moral panic” that is leading to “a flurry of child pornography charges against youngsters guilty only of entirely consensual sexting.”

When making that claim, Parker links to this post about a case in British Columbia.

On a more careful examination of the case Parker cites, we realize that while the sexting might have been consensual originally, the criminal charges arose from actions that took place after a relationship ended and could in no way be described as consensual.

For a more accurate description of that case read this. Parker didn’t link to that, or provide more details, because it doesn’t fit his narrative. He is constructing a paper dragon and the only valid argument he is making is that what happened in the Rehtaeh Parsons case does not fit the definition of child pornography that most of us have come to understand.

Sometimes, being a contrarian is a good thing. We need contrarians because they challenge us to think and question the zeitgeist. However, this is a cautionary tale about how being a knee-jerk contrarian can put you far out on a ledge — in an untenable position maintained only by stubbornness, not reason.

In a parting cheap shot at journalists who are doing their job and ensuring that public officials are held accountable, Parker writes in his Facebook teaser for the blog post: “This is not the Nova Scotia news media’s finest hour” and refers to some as “journocutors.”

Not our finest hour? Parker, none of us claims to be as perfect as you, but at least we are not creating a distraction from the more important discussions that actually pertain to this case.

If there is fault here, it is with you for creating this attention-seeking distraction. Most importantly, though, the fault lies with the public institutions that failed Rehtaeh Parsons, and not with the media and the public that is seeking justice.

Now, let’s get back to our more important discussions.